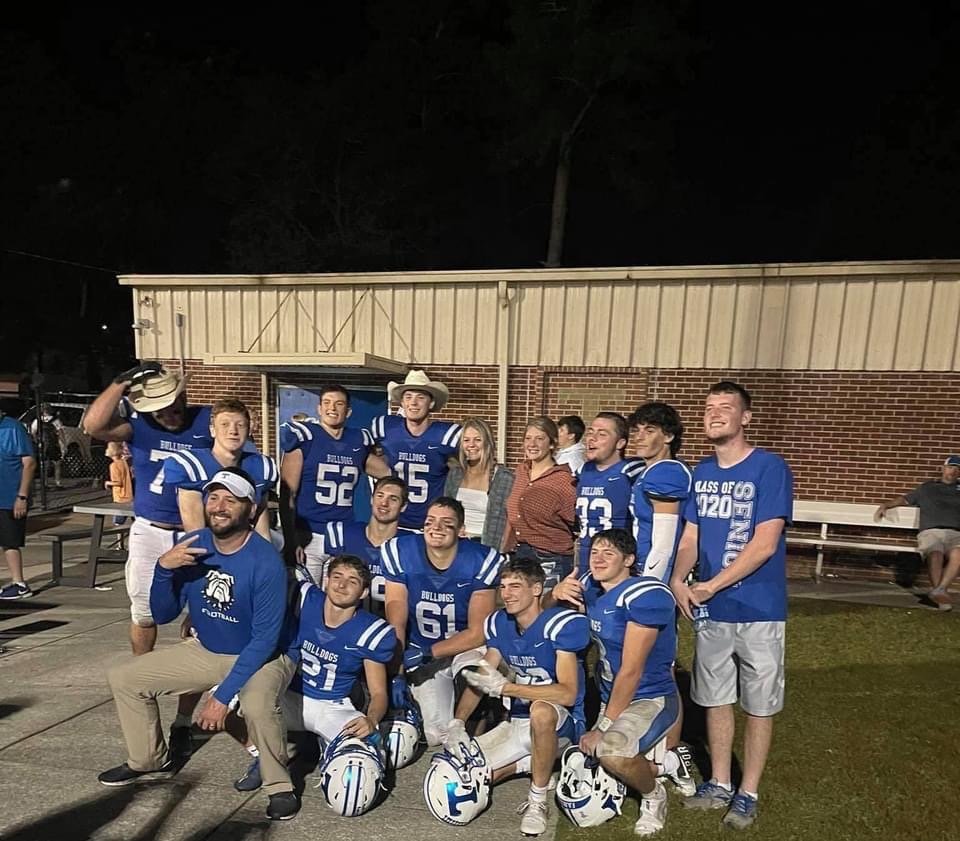 When Dade County couldn’t play Trion last Friday, the Howard School of Chattanooga was invited to town. The Trion Bulldogs hosted and out hustled the Howard Hustlin’ Tigers, 37-6. The Bulldogs are looking ahead to back-to-back home games the next two Friday nights.

On the opening drive, Bulldog Rob Brown picked up a 1st down after a 17-yard run. Trion quarterback Logan Eller completed a pass to Linkin Farrar before a hand off to Rob, who drug a passel of Tiger defense with him to another first down. Rob pushed it through from the 2-yard line into the endzone! Devin Dalton, Trion’s left-footed kicker, made it 7-0 with the extra point.

Howard’s offense couldn’t get a drive going and punted to the Dogs who worked for yardage and went for a field goal from the 28 yardline. Freshman Andy Ramirez was successful and gave the Bulldogs a 10 point lead.

Howard tried it again with 3:24 left in the first quarter, Howard took over, but Brody Brown brought down a runner with Crawford Lee helping out. Another Howard attempt was stopped by Issaic Stewart and a pack of Dogs. The Bulldogs continued the pressure when Bladyn Bowman and Brantley Willbanks forced the QB to throw the ball out of bounds, giving the Bulldogs possession at the Howard 46 yardline. The Dogs weren’t able to score and Deparlier punted. The first quarter ended with the Dogs up 10-0.

In the 2nd quarter, Willbanks made another great hit to stop the Howard offense. The Tigers had a few  good runs, but Trion’s defense did not quit. The Trion crowd went wild when Connor DeParlier intercepted and took it all the way into the endzone. Unfortunately, a penalty on the Dogs meant  the TD was called back, but the Bulldogs still gained possession.

In an exciting offensive drive, Bulldog QB Logan Eller had a great run with help from the Trion offensive line. A holding call on the Bulldogs called back a great Eller run. Rob Brown ran hard during this drive, and was even called for hurdling, though he was avoiding low hits at his knees that he had taken earlier in the game. At third down and three, Rob got the needed 1st down. Eller completed a pass to Nathan Willingham for an 8 yard gain. Next, Eller passed it off to Brown who picked up another first down with 3 yards to go. The coaches sent in big guys Cohen Blaskchke, Lucas Stoker, Colby Evans, and Cole Cavin to help Rob smoothly take it in for the TD. Devin Dalton was good for the extra point and the Bulldogs went up 17-0 with seven minutes remaining in the first half.

When the Bulldog defense took the field. Brantley Willbanks and other Dirty Dogs made it impossible for Howard to make anything happen and forced them to punt from their 40.

Trion took over,  Riley Blackwell picked up a first down with a fast dash down the field. Eller picked up another 1st down. Rob took off and took a tackle that would earn a Howard player a penalty for targeting. Next, Logan Eller saw an open lane and ran the ball six yards into the endzone. A holding call on the Dogs forced Dalton to miss the extra point from the 35-yard line, but the Dogs were up 23-0.

The Bulldog defense was extra tough with Blaske causing a loss of yardage for Howard. The Trion crowd again went wild when Brantley Willbanks sacked the quarterback and forced Howard to punt to the Bulldogs with 3 minutes remaining before the half.

When Trion took possession, a great block by Cole Cavin helped Brown get a first down. Eller completed passes to Nathan Willingham and Linkin Farrar before connecting with Connor Deparlier on a 14-yard pass into the endzone. Dalton put up the extra point that would give the Bulldogs a 30-0 lead going into halftime.

Howard got the ball after halftime. Kaleb “KP” Park made a tackle to take down a Howard running back and Riley Blackwell covered the receiver and knocked the ball out of play. The Tigers turned it over on downs.

In the second half, Howard put together one successful drive to put points on the board. Howard went for two but Trion’s Garrett Mahan intercepted the Tiger pass.

In the 4th quarter, Trion began feeding Brantley Willbanks the ball until he made his way into the endzone on a 4-yard run to give the Dogs a 37-6 lead. Willbanks refused to quit on defense and completely crushed the Tiger’s chances for another TD.

After their 37-6 win against Howard, the Dogs play at home the next three games. Next week they host Cedar Bluff before getting into region action against Bowdon the next week, Sept. 24. Go Bulldogs!