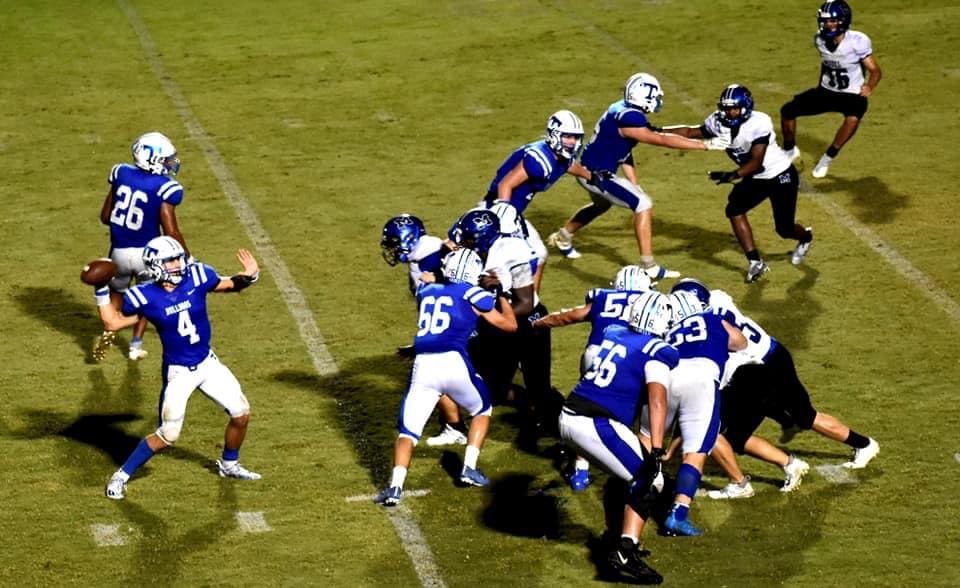 On their first drive, Rob Brown and Logan Eller each rushed successfully for yards. Linkin Farrar made a huge block that allowed Brown to get one of the final first downs of the drive. Brown swiftly took it in for 6, and Devin Dalton added a point to give the Bulldogs a 7-0 early lead in the game.

The Bulldog defense went to work and held Model on their first drive. Linebacker Brody Brown made an impressive stop that helped force Model to punt.

In their second drive, the Bulldogs turned the ball over and Model took advantage of the opportunity to score and tie the game 7-7 with 2 minutes left in the 1st quarter.

When Model kicked it off, Connor Deparlier returned it to the 36-yard line. Quarterback Logan Eller made a couple of successful passes to Linkin Farrar. At fourth and 2-yards, Coach Sean Patrick decided to go for it. Rob Brown moved it 5 yards for a huge first down for Trion. As the first quarter came to an end, the Bulldogs committed their 2nd turnover of the night to give Model the ball.

Despite big defensive plays by Ben Allen, Brantley Willbanks, and Bladyn Bowman, Model got several 1st downs. After a hard drive, Model was going for it on 3rd and 2, but Caden Daniels made a hard hit in the backfield and caused a loss of yardage.  Model was forced to go for a field goal, but tackles by Brody Brown and Rilley Blackwell foiled their attempt.

When the Bulldogs took control, Rob Brown broke loose for a huge 30-yard run. When the Bulldogs had to punt, Deparlier kicked a beautiful high spiral. Rilley Blackwell tipped it back to Linkin Farrar who downed it on the 2nd yard line, putting the Blue Devils dangerously deep in Bulldog territory and eventually forcing them to punt.

In their last drive of the first half, quarterback Logan Eller had a stellar performance, leading it off with a great run for a first down. At 1st and 10 on the 22 yard line, he completed a pass to Nathan Willingham.  Later, at third and goal on the 5 yard line, Eller completed an 8 yard pass to Bryce Cordell for a touchdown. Dalton added the extra point to give the Bulldogs a 14-7 lead.

Andy Ramirez kicked it off and the Bulldog defense went into action. Isaaic Stewart had a great tackle before the clock ran out and ended the first half with the Bulldogs up 14-7.

After the half, the Bulldogs kicked it off and Model returned it to the 27 before Brantley Willbanks tackled to stop the Devils.  Again, Willbanks and Cole Cavin forced another loss and a 4th down. Model punted and Deparlier called for fair catch on the 41 yard line.

When the Bulldogs took possession, Rob Brown made two physical runs to pick up a big  first down for the Dogs. Unfortunately, the Dogs had several penalties this drive. Finally, on 3rd and 18, Logan Eller made an awesome touchdown pass into the end zone to Linkin Farrar.  Dalton made the extra point. This big drive by the offense gave the Dogs a 21-7 lead.

Ramirez kicked it off and the Bulldog defense was again too much for the Blue Devils. Clay Chesley made the stop at the 34. Great defensive plays were made by Brody Brown, Nathan Willingham, and Clay Chesley covering Model receivers, and Cole Cavin putting pressure on the quarterback. Model had to punt.

In their next offensive drive, Eller connected with receiver Brody Brown for a great 1st down. Unfortunately, numerous penalties forced the Bulldogs to punt.

The Bulldog defense would not let up on the Blue Devils. Lucas Stoker made a great tackle, and Colby Evans and Willbanks sacked the Model quarterback. Model was again forced to punt as the game went into the fourth quarter with the Bulldogs leading, 21 and 7.

In the fourth quarter, the Bulldog offensive line made it possible for Eller and Brown to move the ball. Rob Brown was working overtime with Toby Maddux out with an injury. Finally, it was a big down: fourth and four. Coach Patrick made the call. The Bulldogs drew Model off sides to pick up a huge 1st down! In the next play, Logan Eller threw a perfect 21-yard pass and Linkin Farrar made an incredible catch in the end zone. Dalton delivered the extra point to give the Dogs a 21 point lead.

With the Dogs leading 28-7, Ramirez kicked it off, but Bowman, Stoker and Crawford Lee made great tackles to keep pressure on Model.

On their final possession, Eller made several nice runs for 1st downs. Finally with one minute left in the game, on fourth and one, the Bulldogs went for it, which meant a hand off to Rob “Beowulf” Brown, who once again got the first down. The Bulldogs let the clock and Model’s chance of a repeat run out.

The Bulldogs were hot out of the gate and aggressive in the second half. They earned their victory over Model, 28-7.  The Dogs are 2-0, and despite a cancelation against Dade County this Friday, the Bulldogs are actively looking for an opponent to fill the opening. Come out and watch this team; you will not be disappointed.